With the project Loops in Transmission Staš Vrenko continues his exploration of hardware and software processes of recording, storing, processing and transmitting of sound that was already the basis of his past works Connective and Adoption Techniques.

The project deals with technical media that are capable of constructing specific modalities of measuring and recording time while also creating unique technology-based temporalities. Interactive sound installation Loops in Transmission is based as an interactive system of three identical sound devices or tools intended for processing of sound and logical signals. The foundation of each tool are smartphone applications developed for this specific purpose, extended with a selection of analogue-digital modular electronic circuits. Through a system of (electromagnetic and data) feedbacks in individual devices and through feedback on the level of communication between devices via LAN connection, Loops in transmission resonate and sonify the microtemporal processes of analogue and digital tech media that are otherwise inaccessible to human perception.

Loops in Transmission continues Staš Vrenko’s exploration of hardware and software processes of recording, storing, processing and sound transmission. These were already the basis of his past works, namely Connective and Adoption Techniques, whereas in the latest project his interest in sound occurrences expands also to sonicity. As defined by German media theorist Wolfgang Ernest, sonicity denotes the oscillation events and the frequency domain as an epistemological object and is referring to unheard events in the field of the analogue and the digital, the vibrational and rhythmic. It represents a juncture of time and technology.

Technical media that are, besides measuring and recording time, also capable of time axis manipulation, and creation of unique technology-based temporalities are defined by Ernst as time-critical media. The temporalities of these technologies can only be understood in their processual time operations through the exploration of technical signals of algorithmic processes, not through the analysis of cultural signs. Their temporalities, therefore, disrupt the human perception of time and separate the time of human culture from the time of technical media (the tone from the frequency).

Time-critical media represent an implementation of physical and mathematical laws and are therefore not merely cultural products. Mechanical storage media (phonograph, cinematography, magnetic tape …) and electronic transmission media (radio, television….) are based on analogue processes that introduce particular discontinuities by enabling storage and re-play of sounds. In the 20th century, these technical media caused crucial shifts in the field of music that was (in the Western tradition) based on the symbolisation of sound (notation) until then.

The temporality of digital devices, which transform sound signals into numeric (binary) form – once again a particular symbolised one -, is linked to the material characteristics of analogue components (e.g. RC oscillator that generates the operative frequency of digital devices). Mathematised sonicity is also present in certain electronic sound synthesizers, in which digital signals function as trigger and gate signals or as square-wave sounds. The transition from the analogue to the digital paradigm also represents a shift in procedures of temporal processing from the use of signal delay lines to micro-temporal calculated time windows. These make the digitally calculated real-time fundamentally dynamic: »The computer was never as time-critical […] [T]he necessary connections corresponding to the commands coded in working memory are only established when needed, which results in greater flexibility in the time-critical field.«1 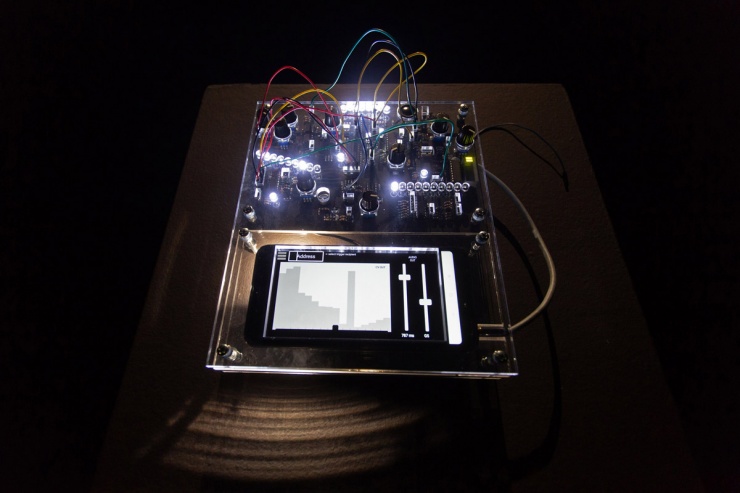 The interactive sound installation Loops in Transmission explores the unperceivable time processes of technical media – specifically their implicit sonicity – through a system of three identical sound devices. These three are dedicated to sound and logical signals processing both on the software and on the hardware level; the basis of the individual devices’ processes are custom-built applications running on smartphones, enhanced with a selection of electronic circuits based on analogue-digital chips. The processing of electromagnetic signals (in waveforms) intervenes with the temporality of digital media (smartphone or mobile applications). The circuit enables direct intervention in the digital output signal, which is being processed according to analogue and digital principles. Another intriguing “shift” in the circuit however is the transition of the electric signal into the form of sound on a minimal physical distance between the speaker and the microphone which are both integrated within the circuit.

The key level of the instruments is the system of (electromagnetic and data) feedback loops in individual devices and loops on the level of communication between the devices through a LAN connection. The function of feedback loops in Loops in Transmission can be thought through the prism of Alvin Lucier’s work I am sitting in a room (1969), in which the play and record feedback of speech amplifies the resonating frequencies of the space and blurs words into rhythmical sonority. This procedure transforms sound into a »chrono-poetic event where the true chrono-poet is the recorder itself«.2

Similarly, through self-resonating of the technical media itself, and with series of real-time signal amplification, the dynamic feedbacks in Loops in Transmission inevitably also amplify the latencies which, in the interaction with technology, brings to the forefront the vast quantity of micro-temporal configurations needed for successful media operations. The system of feedback loops enables an indirect sonification of the micro-temporal processes of analogue and digital technology media. Therefore, Loops in Transmission can be at once understood as a sound and a measuring tool, an instrument based on a specific (media archaeological) method that is not »just a human mode of understanding technology, [but] is also a form of technical perception in which the technological device itself turns into a listening organ.« 3 This said, the ‘technological message of the media’ also becomes its musical substance.

The project was  realized in cooperation with the ŠUM magazine and is supported by MOL – Department for Culture and Slovene Ministry of Culture.
It is part of EASTN-DC Network, which is co-funded by the Creative Europe programme of the European Union.

Staš Vrenko is an artist, musician and electronic instrument designer. He holds an MA (cum laude) in sculpture from the Ljubljana Academy of Fine Arts and Design for which he received the student Prešeren Award. His practice involves various fields of art with a strong focus on sound exploration, electronic media and technologies, kineticism and performativity. In the past few years, he has presented various solo projects: Record (Kino Šiška), Loops in Transmission (osmo/za), Adoption Techniques (P74) and Connective (MoTA). He has also been featured on group exhibitions at the international festival Agora Creative (Grenoble), SCCA Ljubljana, Lighting Guerrilla Festival, MFRU_25, Kiblix, Vžigalica Gallery and Škuc Gallery, among many others.